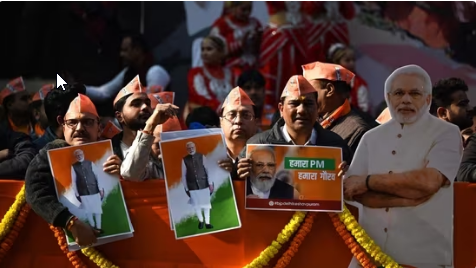 PM Modi is greeted in Mumbai by the Shiv Sena (UBT) with the remark, "Another campaign..."

The editorial in Sena's newspaper Saamana makes various comments regarding PM Modi's visit to Mumbai. His visit is described as a "campaign for his party."

Prime Minister Narendra Modi is greeted mockingly by the Shiv Sena Uddhav Thackeray group before arriving in Mumbai. According to the party's spokeswoman "Saamana," Prime Minister Modi's visit to the city is just another "campaign for his party," and the claim that he is laying the groundwork for Mumbai's prosperous future is "wrong." It further stated that if no attempts are made to "loot" the Marathi people's labour, the city will be blessed.

"Modi is spending a short time in Mumbai, and it is stated that during his visit, he will lay the groundwork for Mumbai's prosperous future. But when exactly did the BJP begin to be concerned about Mumbai's future and prosperity? It is untrue to claim that the Prime Minister represents Mumbai's bright future. He is running for office on behalf of his party, but can Mumbai be free of Shiv Sena saffron?" The editorial was cited by news source ANI.

The editorial went on to criticise the Shinde Shiv Sena section, claiming that it had been "swallowed" by the Bharatiya Janata Party like "a crocodile does with a frog." Additionally, it made note of how cutouts of BJP leaders are clearly larger than Balasaheb Thackeray, the founder of the Shiv Sena.

Sena, according to the party, completed development projects at the municipal corporation level before PM Modi's inauguration of them today. "The Prime Minister will undertake Bhumi Pujan, an inauguration, and other development projects in Mumbai that were largely approved while Shiv Sena was in control of the Municipal Corporation. Despite the Bharatiya Janata Party's best efforts, the public is aware of all "It read.

PM Modi will flag off Lines 2A and 7 of the Mumbai Metro as part of a plethora of other projects. In order to make travel easier, he will also introduce the MUMBAI 1 mobile application. He will formally dedicate seven sewage treatment facilities.