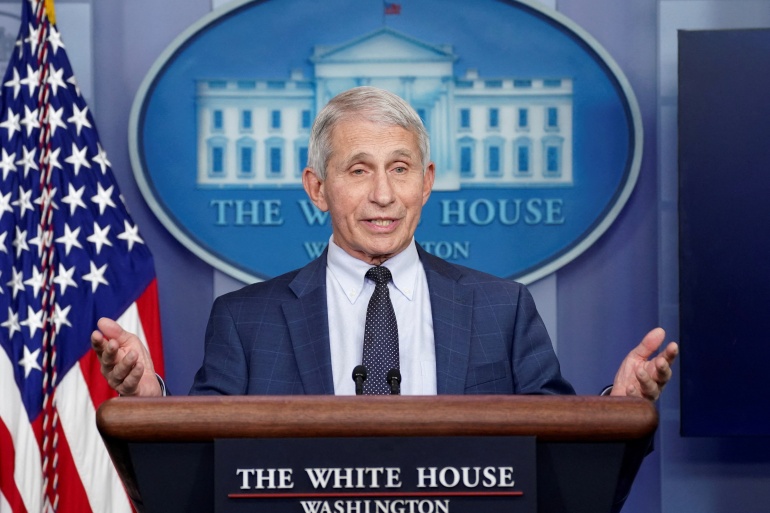 Fauci warns omicron variant is 'raging through the world'

Dr. Anthony Fauci warned Sunday that the next few weeks will put severe stress on hospital systems as the omicron variant of the coronavirus is "raging through the world."

Fauci, President Joe Biden's chief medical adviser, said on NBC’s “Meet the Press” that there is no doubt about the omicron variant's "extraordinary capability" for transmission. Although the latest mutation appears to cause less severe symptoms in vaccinated people, Fauci warned that its transmissibility counteracts the mildness of the cases.

"Our hospitals, if things look like they're looking now, in the next week or two are going to be very stressed with people, because, again, we have so many people in this country who are eligible to be vaccinated who have not yet been vaccinated," he said.

It's already clear that the new variant is "raging through the world," he said. Case numbers have risen significantly in some areas in the U.S., hitting major metro-areas such as New York City particularly hard in the past week.

Case surges have recently forced major sports leagues to postpone games and cancellations to Broadway shows. The NBA announced Sunday that it would be delaying five games due to players and staff members entering health and safety protocols.

The National Hockey League and its players' union said Saturday that roughly 12 games with Canadian teams Monday through Thursday, the start of the NHL's holiday break, will be postponed "due to the concern about cross-border travel" potentially exposing people.

The Public Health Agency of Canada on Wednesday advised against "non-essential travel" and warned that Canadians with plans to travel abroad that it's possible they won't be able to return as scheduled.

Schools, such as Cornell University and Harvard University, also made decisions in the last week to revert back to online learning as campuses see increased community spread.

The hospitalization to case ratio appears to be smaller than with the prior coronavirus variant of concern, delta, according to Fauci, who cited early data out of South Africa. But he was also cautious about that information, saying the region has much more experience with prior infections.

Fauci urged people to be vaccinated, boosted, tested, and to wear masks in an effort to mitigate spread as the holidays approach.

President Joe Biden is expected to address the nation Tuesday, unveiling new steps his administration is taking to combat the omicron variant.

Fauci referred briefly to Biden's winter plan, saying the administration was planning on upscaling existing efforts in testing and vaccination as omicron continues to spread.