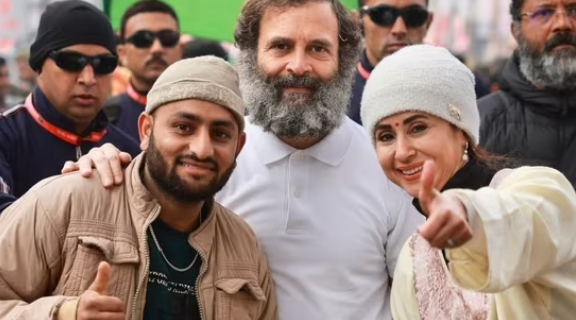 Urmila Matondkar, an actor-politician, joined the Congress's Bharat Jodo Yatra in Jammu and Kashmir on Tuesday. Rahul Gandhi is leading the last phase of the foot march. "When stars join, the journey becomes brighter," the grand old party tweeted in Hindi. Ever since the party's march started in September, many prominent faces - outside of the Congress - have been a part of the grand old party's foot march. Actors, including Pooja Bhatt, former RBI governor Raghuram Rajan, veteran army officers have walked alongside Rahul Gandhi. In Delhi, Kamal Haasan joined the foot march last month.

Urmila Matondar also posted a video on social media that showed her walking with Gandhi. "Walk for Unity, Affinity, Equality and Fraternity (sic)," she tweeted. Before the march, she posted a video message, where she can be heard saying: "In this winter chill, I am addressing you from Jammu. In a short while from now, I will be joining the Yatra. Indian unity is the spirit that has been carried along during this Yatra. All of us have created this India and we have to help it grow. For me, this Yatra is more for the society than politics. The world is functional with love, not hate," she can be heard saying in the clip.

Throughout the Kanyakumari to Kashmir Yatra, Rahul Gandhi has been saying that his party aims to counter the hatred spread by the ruling party in an attack on the BJP and the RSS. Defence Minister Rajnath Singh, however, on Sunday had said that "India is not broken that it needs Congress to unite it".

On Monday, Rahul Gandhi met Kashmiri Pandits and also raised the issue of statehood during one of the addresses.