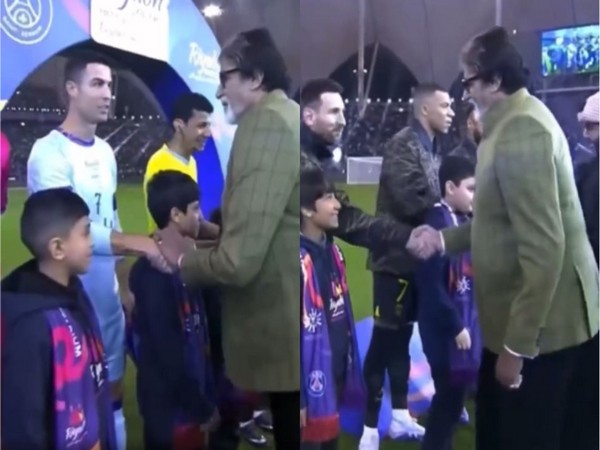 Upon meeting Messi and Ronaldo in Riyadh, Amitabh Bachchan exclaimed, "What an evening."

Amitabh Bachchan tweeted on Friday about his interactions with Lionel Messi and Cristiano Ronaldo in Riyadh.

"An evening in Riyadh" what an evening.. Cristiano Ronaldo, Lionel Messi, Mbape, and Neymar all playing together.. and yours self invited guest to open the game.. PSG vs Riyadh Seasons..," Amitabh wrote on Twitter when he expressed the similar idea. Absolutely amazing!!! The actor released a video from the game that astounded his followers. One person wrote, "The GOAT of Bollywood meeting the GOATs of Football world." "Amit ji, we are all proud of you. You can learn from your modesty and dignity. They are very fortunate to shake the hand of the greatest actor in the world, another person wrote.

The video showed Amitabh Bachchan entering the stadium with match officials and greeting each player one by one. He shook hands with Kylian Mbappé, Neymar, Ronaldo, and Messi. Children watching the football stars in action were equally as shocked to see the actor on the pitch. In a thrilling 5-4 triumph over the Saudi All-Star XI, Lionel Messi and Cristiano Ronaldo each scored once for Paris Saint-Germain. The two football juggernauts faced off against one another for the 37th time in their history on Thursday, their first meeting since 2020. They may never again cross paths on the field. Both Ronaldo and Messi have now scored 23 goals in their previous meetings, although Messi currently holds the series advantage with 17 victories to Ronaldo's 11. Amitabh most recently appeared with Anupam Kher, Parineeti Chopra, and Boman Irani in the family-friendly comedy Uunchai. The audience responded well to the picture, which Sooraj Barjatya directed. He will soon be seen with Deepika Padukone in The Intern and Prabhas and Deepika Padukone in the pan-Indian movie Project K.
Prev Post