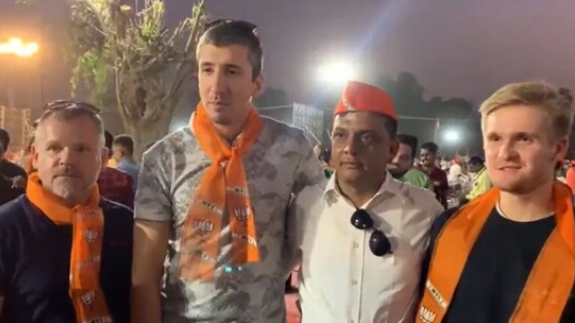 After the official Twitter handle of the party's state unit shared a video on social media, a controversy emerged over the alleged involvement of foreign nationals in election campaigning for the BJP in Gujarat. Saket Gokhale, Trinamool Congress (TMC) activist and national spokesperson, has written to the Election Commission demanding immediate action against the "foreign nationals" seen campaigning for the BJP while wearing the party's scarves.

“This tantamounts to serious foreign interference in Indian elections and is completely in violation of the Representation of the People Act, 1951 as well as the visa laws of India,” Gokhale said in a letter to EC.

In a video shared by BJP Gujarat, some individuals ostensibly of foreign origin can be seen campaigning for the saffron party in the poll-bound state and lauding Prime Minister Narendra Modi's work.

“A lot of people (are) coming to listen to their leader, to give respect, to show their love,” a man can be heard saying.

Gokhale alleged that foreigners are being used by the BJP for campaigning in Gujarat in complete violation of election laws. He added that the “foreigners sound Russian raising serious questions of interference in elections.”

Foreigners are being used by BJP for campaigning in Gujarat in complete violation of election laws. Also, the foreigners sound Russian raising serious questions of interference in elections.

“The Election Commission of India is, therefore, requested to IMMEDIATELY initiate action on this complaint considering the seriousness of the matter as well as notify the Foreigners Regional Registration Officer (FRRO) in Gujarat to take urgent action under immigration law against foreign nationals campaigning for a political party,” the letter stated.

The People’s Representative Act 1951, which governs how elections are conducted in India, does not expressly deal with foreign nationals campaigning for a party but visa rules forbid any foreign entity from participating in political activities in India.

In 2019, the Union home ministry cancelled the visa of Bangladeshi actor Ferdous Ahmed who triggered a controversy by appearing in a TMC rally. The actor was also blacklisted by India after the MHA asked the FRRO to ascertain if Ahmed had violated visa rules. This means the actor will be unable to get a visa for India in the future.