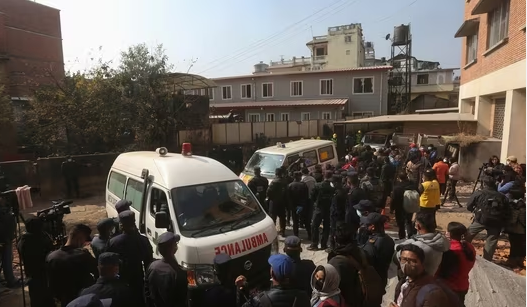 Nepali hospitals deliver the victims of the Pokhara aviation tragedy to their distraught families.

Following the country's greatest aviation catastrophe in thirty years, a plane with 72 people on board crashed on Tuesday, Nepali hospital staff started the gruesome chore of delivering bodies to bereaved relatives.

Six children and 15 foreigners were among the passengers, and it is assumed that everyone on board perished.

Almost continuously, rescuers have been digging up human remains from the 1,000-foot-deep, 300-meter-deep ravine that is littered with twisted aeroplane seats and pieces of fuselage and wing.

Police spokesman AK Chhetri told AFP that by early Tuesday, 70 bodies had been found. The previous day, a senior official stated that there was "no chance" of discovering any survivors.

"One body was found yesterday night. But it came in three halves. Whether there are three bodies or just one, we are unsure. A DNA test will be required to validate it "explained Chhetri.

Drones were being employed, and the search area for the two bodies that were still missing had been increased to two to three kilometres (one to two miles).

According to Bikram Raj Gautam, manager of Pokhara International Airport, the black boxes from the ATR-built aircraft were sent to the authorities on Monday.

The black boxes from the aircraft built by ATR were sent to the authorities on Monday, according to Bikram Raj Gautam, manager of Pokhara International Airport.

On Tuesday, hospital staff dressed in blue and white protective suits and masks moved bodies wrapped in plastic into army vehicles while heartbroken family members wailed and hugged outside.

The vehicles then departed for the airport, where the corpses will be flown back to Kathmandu, the nation's capital.

One victim's remains was placed on a bier decorated with orange marigold flowers as mourners walked by and prayed outside in the winter light.

"Families have received eight bodies. Following autopsies here in Pokhara, we will deliver another 14 bodies. 48 remains have been sent to Kathmandu for DNA testing and family delivery "said Chhetri.