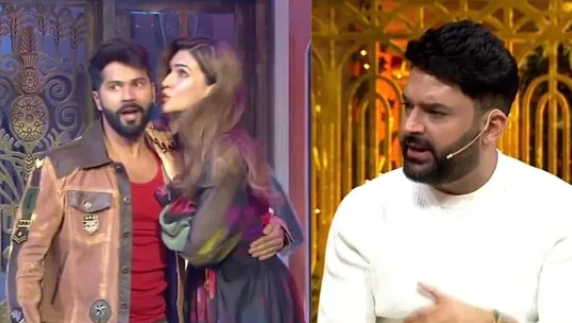 Kriti Sanon and Varun Dhawan are promoting their upcoming film Bhediya. The actors will be seen on the latest episode of The Kapil Sharma Show, which airs on Saturday, with the film's cast. Kriti and Varun are seen dancing to their song Jungle Mein Kaand on stage in a promo video for the upcoming episode, while host-comedian Kapil Sharma and actor Archana Puran Singh cheer for them. Kapil also described Kriti as beautiful and stated that anyone, including a bhediya (wolf), would become a man for her.

Kriti gave Varun Dhawan a couple of kisses on the cheek as she joined him on stage in the Sony Entertainment Television promo released on Saturday, and the two danced with background dancers. Kapil then introduced their film Bhediya in Hindi, saying, "Girls love pets." A wolf falls in love with the girl (Kriti) in this film." "Kya karein itni khoobsurat ladki (Kriti) ho toh janwar ke andar ka insaan jaag hi jata hai," Kapil said, "when the girl is so beautiful, the human in an animal also comes out."

Varun and Kriti Sanon are busy promoting their upcoming film Bhediya, which will be released in theatres on November 25. Amar Kaushik has directed the horror comedy, which is backed by Dinesh Vijan. Bhediya follows Bhaskar (Varun), who transforms into a werewolf on every full moon night after he is bitten by a werewolf. Kriti seems to play a veterinary doctor in the film, which also stars Deepak Dobriyal and Abhishek Banerjee.