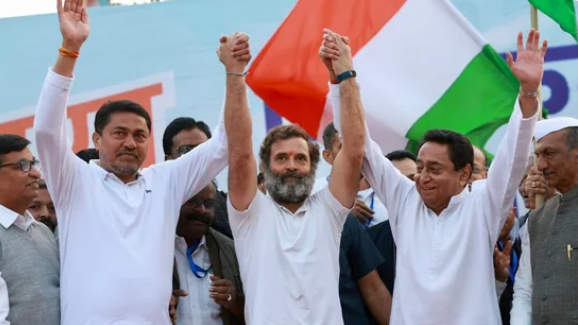 Govind Singh, the Leader of the Opposition in the Madhya Pradesh Assembly, was also seen holding the flag on the occasion.

Gandhi said on the occasion, "This yatra is against the spread of hatred, violence, and fear in the country." We started the Bharat Jodo Yatra by taking the tricolor from Kanyakumari. Nobody will be able to stop this tricolor from reaching Srinagar."

The yatra started from the Boderli bus stand at St Xavier International School Jainabad Fata in Burhanpur district and will go through seven Madhya Pradesh districts over the next 11 days.

Congress communications in-charge Jairam Ramesh said that Burhanpur has a “long history and became an important place during the Mughal rule, especially during Shah Jahan's reign.”

“One-sixth of Burhanpur district's cultivated area is covered with bananas and it’s also one of the centers of the power loom industry. @RahulGandhi will be interacting with banana growers and power loom workers today afternoon,” he said in a tweet.

Priyanka Gandhi Vadra and her family are expected to arrive in Burhanpur in the evening to join her brother on the yatra. She will participate in the yatra between Burhanpur and Indore on November 24 and 25, according to Kamal Nath. This will be Priyanka Gandhi's first time participating in the Congress's mass outreach program, which will depart from Kanyakumari in Tamil Nadu for Kashmir.

So far, the yatra has taken in Tamil Nadu, Kerala, Karnataka, Andhra Pradesh, Telangana, and Maharashtra.

Gandhi had shown some old documents during a press conference in the Akola district of Maharashtra claiming they contained a letter written by Savarkar to the British. “I will read the last line, which says 'I beg to remain your most obedient servant' and is signed by V D Savarkar, which shows he helped the British,” he had said.